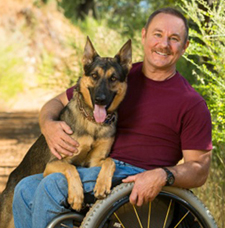 Q. I’m 58, with 30 years as a T10 para. About five years ago I started getting pressure sores on my ischial areas due to shoulder problems limiting my weight shifts. In hindsight, I should have switched to a different type of weight shift, like leaning forward. I’d never had skin issues before so I’d gotten out of the habit of daily skin checks. This led to multiple hospital stays, major skin flaps, and having both ischial tuberosities shaved down. Now the skin on my butt is so compromised I can only stay up in my chair for an hour or two. Now I’m scheduled for an eval at a wheelchair-seating clinic. Are there any cushion options for people with skin as fragile as mine?
— Cindy

A. Cindy, your story underlines the importance of doing daily mirror-skin-checks. Even with a perfect cushion, a pressure sore can crop up from a variety of skin insults — a bruise, weight gain or loss, or changes in weight shift frequency. Being evaluated at a wheelchair-seating clinic is vital for anybody with frail or aging skin. Although the clinician should be well versed on the latest and best cushion options for your needs, here are a couple of wheelchair cushion options you might want to ask the clinician about:

Aquila SofTech is an alternating pressure air cushion that automatically does weight shifts for you, as often as every 30 seconds. The key to the SofTech — and all Aquila cushions — is two groups of air bladders that alternate pressure from side-to-side via a battery-operated pump, which provides a gentle weight shift. The SofTech cushion is self-contained. It is a water-proof-coated foam cushion with air bladders, air pump and battery integrated into the cushion, which has a total weight of five pounds. All Aquila cushions are designed to prevent bottoming out.

The Aquila cushion pump is surprisingly quiet, similar in volume to the internal cooling fan in a laptop computer. The battery can pump up to 40 hours on a charge. A remote control enables five firmness (air pressure) settings, controls the length of time between air pressure shifts — ranging from 30 seconds to five minutes — and includes a battery status light.

Each Aquila cushion is custom built to address a client’s unique seating needs — from width and depth, number of air bladders, to off-loading areas where there is currently an ulcer, according to Steven Kohlman, Aquila’s president.

Eric Schroeder, 42, of La Crosse, Wisconsin, who has spina bifida, spinal stenosis and chiari malformation, fought an ischial pressure sore for three years before it progressed to stage IV and he became bedridden for a year. “I heard about the Aquila SofTech from a surgeon,” says Schroeder. “My wound care clinic sent me to a surgeon because they felt it was time for a skin flap. My surgeon said he had success with several people who had pressure sores that healed while using the Aquila. He said he would rather have me try that route first.”

When Schroeder got his Aquila cushion, he was sitting in his wheelchair for only an hour at a time. His wound healed in three months. “It’s been three years since I got the Aquila and I haven’t had another pressure sore, and I’m up in my chair for 12 hours a day.”

Larry Yenter, 50, of Rochester, Minnesota, 26 years as a C5-6 quad, has been using an Aquila cushion for four years. “Before the Aquila, I kept getting pressure ulcers and tried lots of different cushions to stop them.” Over the years he had three skin flap surgeries with both ischial tuberosities shaved down. “When I heard about the Aquila, I was so excited I paid cash for it. I haven’t had any skin issues since I’ve been on it. Between my job as an accountant and an active life, I’m up in my chair at least 12 hours a day.”
MSRP for Aquila SofTech: $4,300; Medicare approved.

Non-Healing Wounds US Statistics on Disabilities

Considerations with a standing chair mechanism in fighting pressure sores.

Inspirational People in Wheelchairs To Follow On Social Media

Inspirational People in Wheelchairs To Follow On Social Media

Get Relief & Healing from Pressure Injuries